WHAT THE FARM IS DOING

As part of the UK’s efforts to stem the spread of COVID-19, the Farm is now closed to the public. Our staff and volunteer team have to prioritise the day to day care of the animals and gardens, their own and the community’s protection from Covid-19.

Staff are currently split into two teams. Team A is dedicated to looking after the animals onsite and Team B are working really hard from home, developing plans to:

1) ensure the long-term sustainability of the Farm

2) support our community members while confined to “staying indoors”,

Some of our plans are listed below.  We welcome your ideas and suggestions for what else the Farm could do that would help us all in these difficult times.

A. Support vulnerable members of our community

B. Take an innovative approach to implement ways that visitors and service users can still continue to benefit from farm life

C. Participate in a joint communications and fundraising campaign with City Farms and Community Gardens throughout London to ensure the sustainability of our movement

Our magical farm space is used by many to lessen isolation, and improve mental health and physical well being – aspects of life that local people will need more than ever when we are once again able to open our gates. We can only hope that this crisis will strengthen communities and lead to a greater appreciation of nature, animals and the great outdoors.

Our thanks to Camden Council, funders and third sector organisations for their ongoing support through these challenging times.

Our thoughts are with anyone who is, or whose loved ones are ill, or experiencing symptoms. 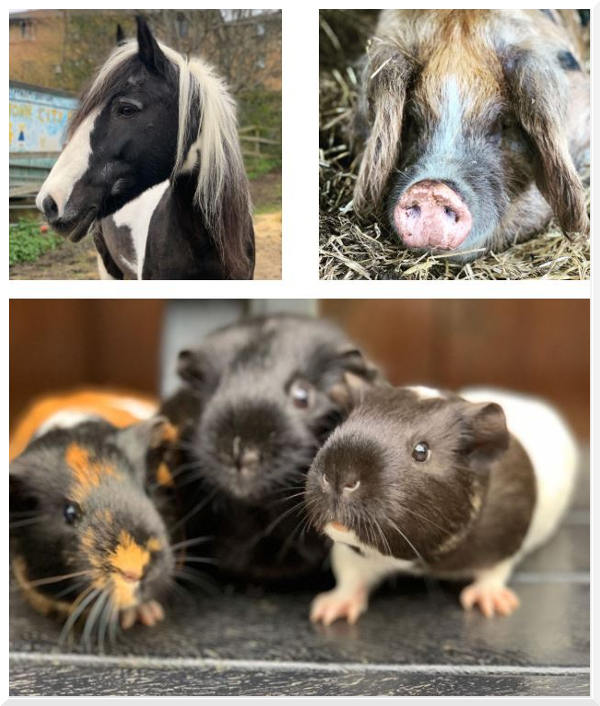 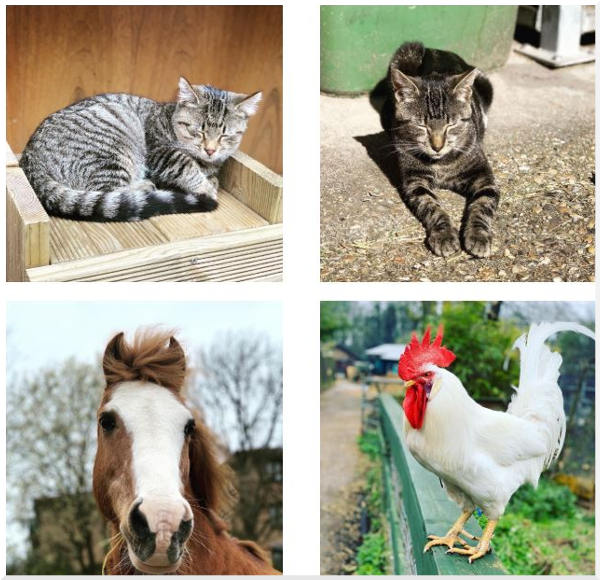 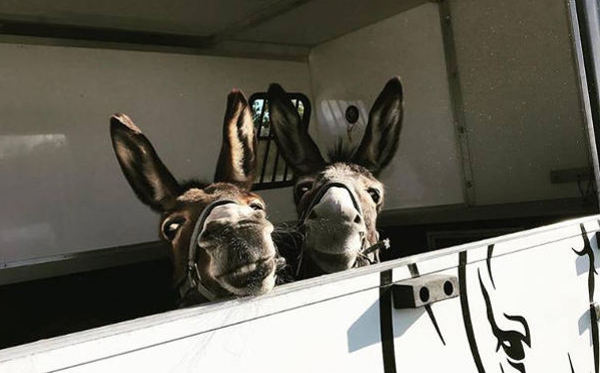 One sunny afternoon, in April two years ago, a white horsebox pulled onto the farm yard; as the driver opened the top half of the van door, four extremely long, grey, furry ears popped up, two sets of eyes, followed by four huge nostrils, and way too many teeth to count. A heart wrenching, ear tingling, life affirming, animal donkey bray filled the yard; finally, our long-awaited donkeys had arrived.

Nora and Dora were two of five donkeys found roaming in Ireland, weak and neglected. They were rescued by the Donkey Sanctuary and shipped to the charity’s headquarters in Sidmouth, Devon. The donkey sanctuary currently houses just over 400 rescued donkeys and offer some of the best animal welfare treatment available to donkeys across the world.  After a rehabilitation period at the donkey sanctuary, Nora and Dora soon found comfort in a new foster home in Kent. They were extremely happy there, but sadly, Cindy, their new foster mum, became ill and we were asked if we could provide them with a new, permanent foster home. Of course, we agreed. 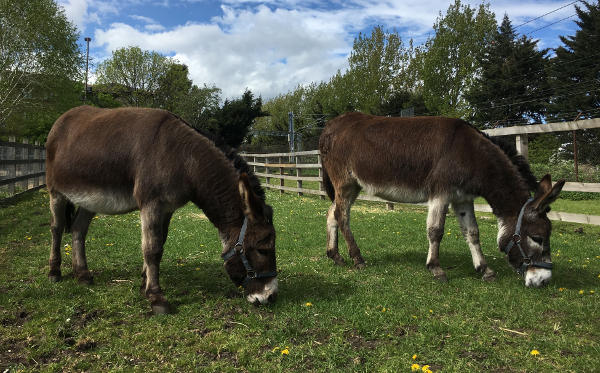 Nora and Dora are the best of friends and staff and visitors have observed firsthand the meaning of a donkey bond or “donkey friends for life”. They are inseparable and have to do everything together; donkey rides, walks out in the neighbourhood in the winter months, veterinary treatment (even if only one of them is ill). Donkeys develop very strong bonds with their companions and separating bonded pairs can create enough stress to result in the serious condition of hyperlipaemia, a severe metabolic disorder which can be fatal. Fortunately, Dora and Nora can always be together in their life at the farm.

Humans have to prove their worth and work hard at gaining the trust of a donkey and even then, the trust can be broken over something very small. Once when Dora had tried to bite Nora for the fourth time, I shouted a loud but firm NO, Dora flipped her ears straight back (a sign of anxiety) and from then on as soon as she heard my voice or I entered her enclosure her ears would flip back and she would stand in a corner, with her rear end facing me. She couldn’t have made it any clearer that she was not happy with the way I had spoken to her and it took about TWO months of gentle coaxing and many treats later for her to accept my human friendship again. 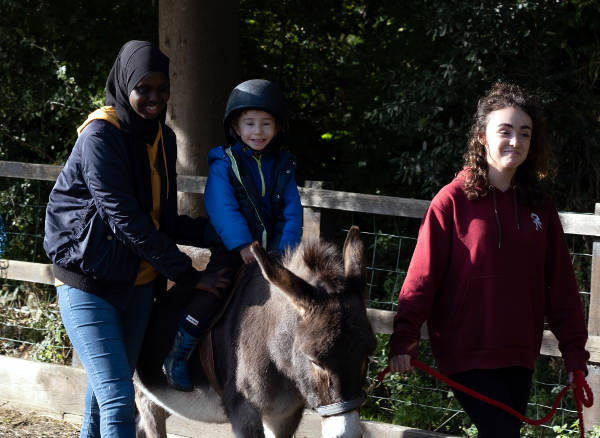 Donkeys are not easily startled (unlike horses) and therefore are much safer to ride. They have the reputation of being stubborn but in fact they are highly intelligent creatures; if they see something unfamiliar or hear something that they don’t much like, they will just stop and stand perfectly still and no matter how much you try to move them they will stand their ground and refuse to budge. One quickly learns that patience and reassurance is the only way to negotiate with these sensitive souls.

“True donkey whisperers know to patiently let them learn by watching and by making their own decision about readiness to proceed. Eventually, the ever-curious, affectionate donkey will willingly take on the task”.
Donkey Sanctuary 2016 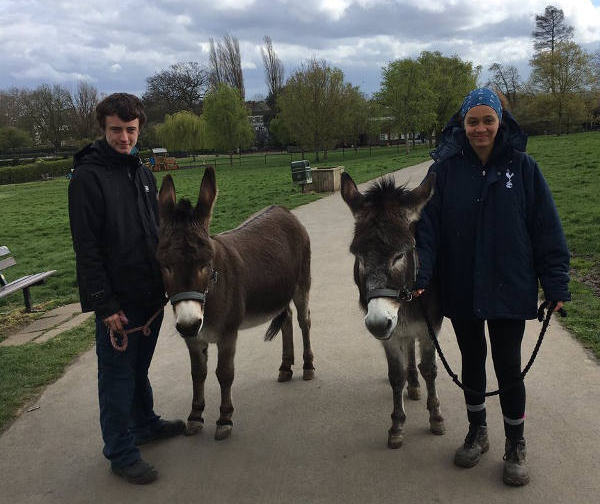 Nora and Dora love to eat grass & for breakfast and dinner they get slices of barley straw. They also like eating shrubs and plants. We give them four slices of barley straw everyday which makes them far cheaper to maintain than the horses. Their diet is carefully balanced for their health and they shouldn’t be given extras as it upsets their digestion and they easily put on weight.

Donkeys originated in the African desert. They love the heat of the sun and really dislike the rain. Unlike a horse, donkeys do not have a natural buildup of grease to make their coat waterproof, so they need access to shelter as they can get cold very quickly.

They are members of the Equidae family, which also includes horses and zebras. 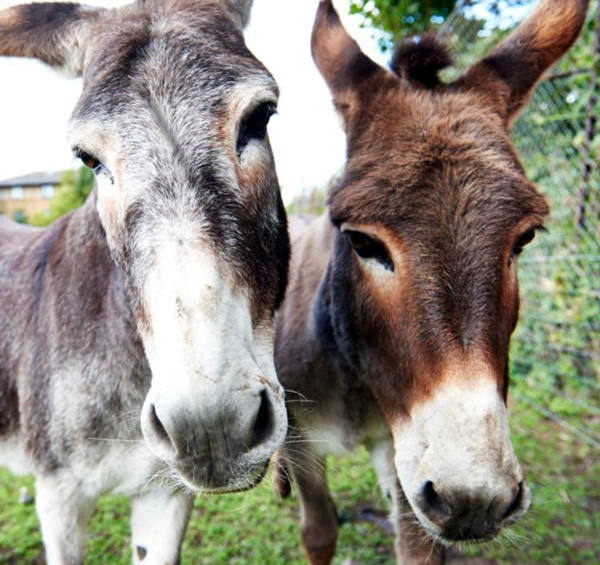 The question I am asked the most is which donkey is older? Nora is taller and has a lot of grey colouring especially around her face, she looks like the older of the two, but is the youngest at 9 years old. Dora is smaller, browner, and the oldest at 13 years. A donkey’s age can be approximately measured by the size, growth pattern and number of teeth.  As a rough guide it is estimated that one year of a donkey’s life is equivalent to about three years of a human.

Donkeys, though typically small, are disproportionately strong. A healthy, mature donkey can carry 25% of its own weight! This is why donkeys are the “quintessential beast of burden, and contribute to the development of many nations by working in mines, space added hauling freight, pulling carts, and carrying riders”.

Personality wise, Nora reminds me of the depiction of Donkey in the film, Shrek; playful, curious, and funny. If she were human, she would probably like to sing, tell silly jokes, talk for the sake of talking. She tries to look for the positive and cheer up those closest to her, which can at times prove rather annoying to Dora!

Dora, on the other hand, exhibits different behaviours; she is calm, sensitive and retiring in nature, and moves more slowly than young Nora. She reminds me of Eeyore in Winnie the Pooh.

The following extract makes me smile and reminds me so much of Dora.

“Very interesting,” said Eeyore. “I suppose they will be sending me down the odd bits which got trodden on. Kind and Thoughtful. Not at all, don’t mention it.

“There is an Invitation for you” said Owl

“This isn’t something to eat, it’s asking you to the party. To-morrow.”

“You mean Piglet. The little fellow with the excited ears. That’s Piglet. I’ll tell him.”

“Of course I’m sure. Christopher Robin said – All of them! Tell all of them”

“All of them, except Eeyore?”

“All of them,” said Owl sulkily.

“Ah!” said Eeyore. “A mistake, no doubt, but still, I shall come. Only don’t blame me when it rains.”

A. A. Milne. Winnie the Pooh

You can visit Nora and Dora at the farm, we are open seven days a week, 9 to 5pm, and on Sundays, weather permitting, they give rides to young children.

Or join Nora & Dora on our sponsored family walk on Friday 17th April. 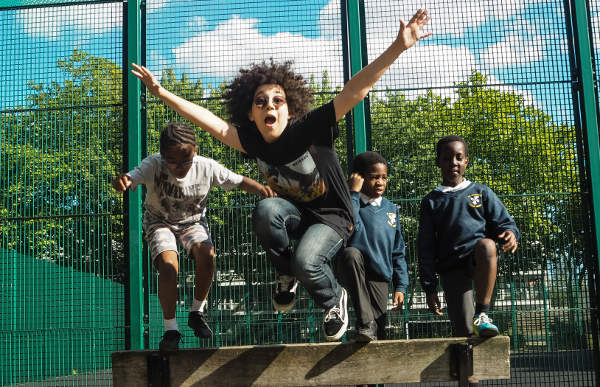 This autumn we are excited to welcome Sir Hubert von Herkomer Arts Foundation who are supporting ten young local people on their photography project at the farm.

They are now at the farm on a 10-week project to create images, many of which will be used on our social media channels and website. The young photographers will be working on mood boards, concepts and themes with an outcome of having their very own photographs published.

The SirHvH Arts Foundation will also continue their film documentary workshop, started at the farm earlier this summer and we will show the short video on YouTube on completion.

Through these projects we are bringing young people’s vision and inspiration to our City Farm, supported by Sir Hubert von Herkomer Arts Foundation workshops, to create and inspire our future generation in the arts.

Here are a few first examples of their amazing photographs so far. 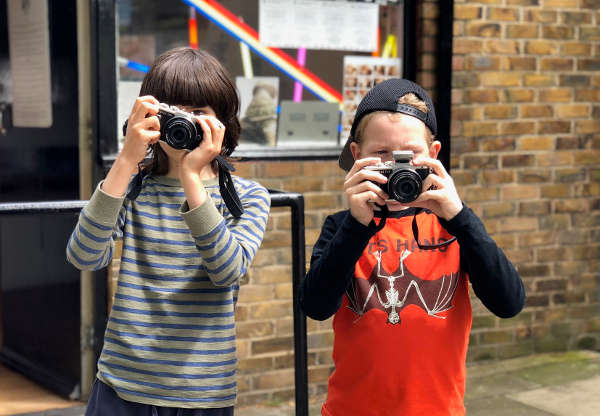 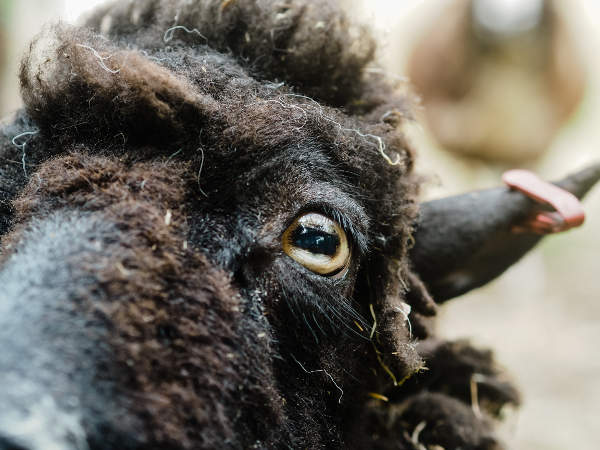 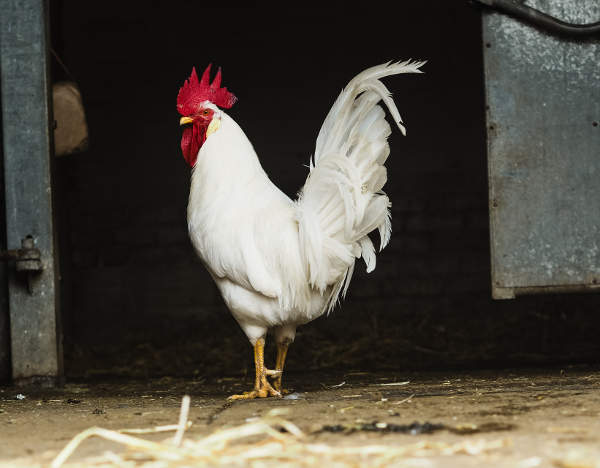