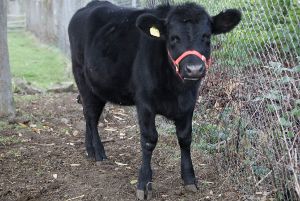 Two calves, Peachy and Tom, went to Thame Market early on Friday 2nd March. Prices were good on the day and we got £1,125 for the pair. They were sold as ‘store’ cattle to another farmer who will keep them for the coming year. Shirley, the heifer (pictured), is being kept and we may breed from her at about 18 months of age, to calf approximately at two & a half years. Like us, cows are pregnant for nine months.

Come and visit the lambs and see them enjoying the spring. Lucky, the Jacob Cross ewe, lambed twins on Monday 26th, February and Wilty, the Wiltshire, lambed twins, two days later. Buttercup, also a Wiltshire, gave birth to a large single lamb in the top field few days later. John, the stockman, only had to assist with one of the births. We now have seven lambs in total.