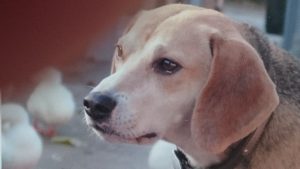 Much loved KTCF dog, Freddy, was recently put to sleep after an inoperable cancer was found in his mouth.  It is a sad decision that many animal carers have to make but was taken with his welfare in mind.

John Langan, KTCF’s stockman, was Freddy’s daily companion and he tells us how he remembers him.

“Fred was always known for his positive and pleasant disposition, always wagging tail and lovely soft ears.  He was also an adept thief and food stealer as well as a professional beggar and his puppy eye, even with the cataracts, always worked their magic.

He enjoyed dancing at your feet to get your attention, howling, chasing the fox, cat, rat etc and was a great laugh.  I will miss him a lot.  “Good boy Freddy” and pat was all that was needed for him to appreciate you.

He helped many children and adults overcome their fear of animals, especially of dogs, at the farm or in schools he visited.  He was a very special dog. ”

Freddy’s family and friends would like to thank Tracey at Abbey Vet for her care and Jackie at Holts for the cremation arrangements.

Freddy’s ashes will be sprinkled around the farm, his workplace, playground and food supply for 13 years so he will be here always.

Freddy will be warmly remembered by staff, volunteers and many farm visitors.