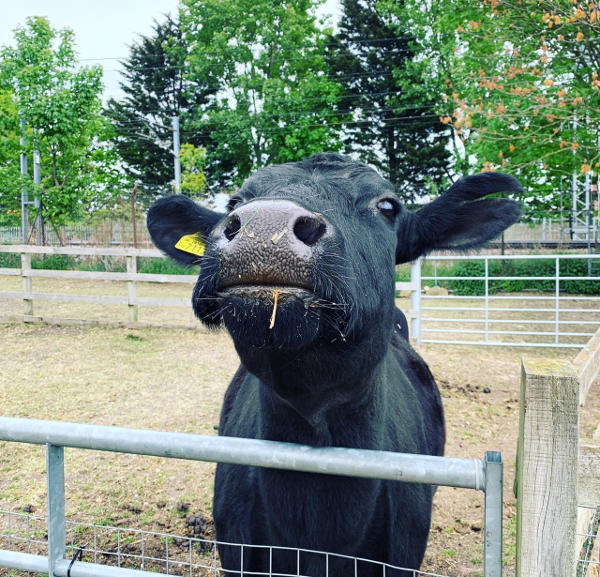 If you’ve passed through the farm (or perhaps gone past on the train!) you’ll no doubt have seen our beautiful Shirley. Though she may look sweet and polite, don’t let that fool you. She’s got quite the reputation for sneaking out at night and having a snack in the gardens… and leaving quite a mess in her wake!

Shirley was born in 2010 and has been at the farm since she was 6 months old, so by now she knows all the tricks in the book. She’s very settled into her farm routine, which largely revolves around eating and napping. What a life! She has a very sweet personality and loves to watch the world go by.

Even though Shirley is the only cow at the Farm her mental health is good. “She has a herd, it just happens not to be cows,” says Dr. Klara Saville, veterinarian and KTCF Trustee. Our programme manager, Simone says, “She interacts with the pigs and donkeys daily, and has the sound and sight of the sheep overnight. She is also fussed over incessantly by her human herd who like nothing better than to groom her and scratch her ears at different times throughout the day.”

Cows, like many domesticated animals, come in all different shapes and sizes; some are small, some are huge, some have horns and some even have long hair! Shirley is a breed known as an Aberdeen Angus, which is one of the most popular breeds of cattle around the world. The Aberdeen Angus, as you may be able to guess from the name, originates from Aberdeenshire and Angus in northeast Scotland. Due to their stocky build and tough nature, they are one of the most popular breeds for beef production. They come in two colours; red and a beautiful solid black. They’re also a polled breed – which means they don’t have horns.

You might see or hear Shirley referred to as a heifer. As with many domesticated animals, there’s an awful lot of niche vocabulary when it comes to cattle! Babies are known as calves, males are bulls or bullocks, and females are cows or heifers. Heifer is the word used for a female cow that hasn’t had any calves. 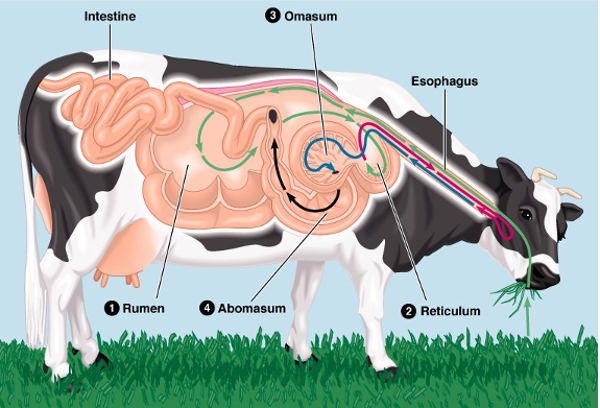 It’s commonly said that cows have four stomachs; whilst their digestive systems is certainly more complicated than ours, that’s not quite true! Cows, along with several other animals on the farm like sheep and goats, are ruminants, meaning they have a very specialised digestive system. Eating grass is actually quite hard work – as you can probably imagine, it’s not the easiest thing to digest. To get around that, their stomach has four different sections; the rumen, reticulum, omasum and abomasum. The rumen contains lots of special microorganisms, which help the cows stomach with breaking down the grass and getting all the goodness out of it. Even then, they have to do it twice! If you keep an eye on Shirley after her breakfast, you might see her chewing on something later in the day… she actually regurgitates food from her stomach to digest again. You may have even heard of the phrase before – chewing the cud!

You can book a visit to see Shirley and her friends and find out more interesting cattle facts. We are open daily and entry is free.