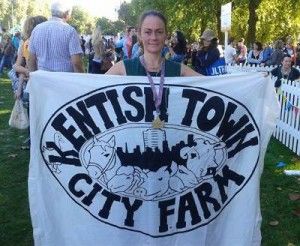 On October 6th 2013 Diane Bevridge ran the Royal Parks Foundation Half Marathon on behalf of the farm. After an early start Di completed her marathon and a total of £651.25 was raised for the farm. An inspiration to us all! Thank you Di.

The farm would also like to say a huge thank-you to Bernard Putz who raised £200 for the farm by taking part in a triathlon. Thanks for making such an effort!